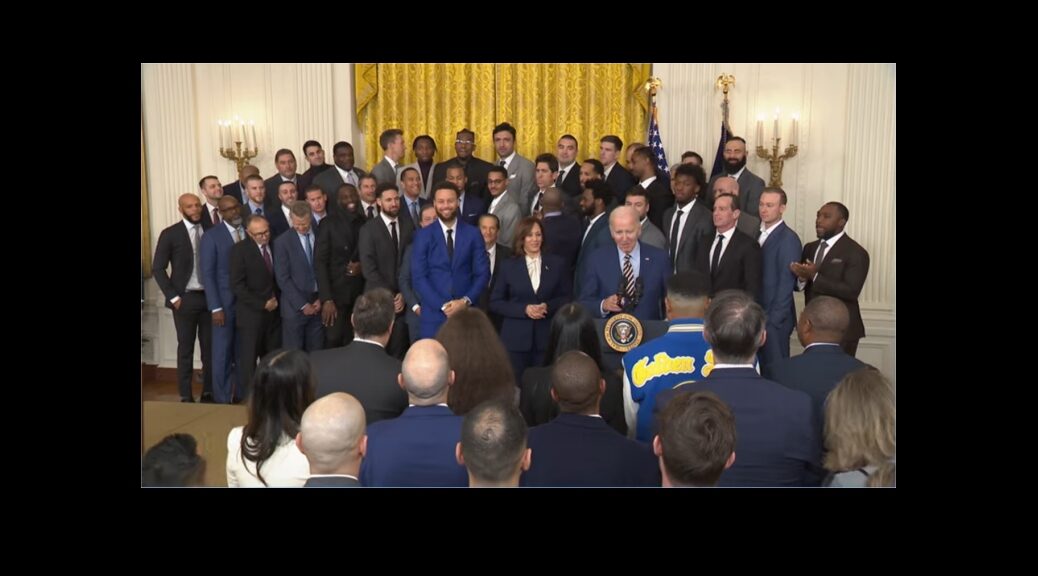 (Recall that our disgraced and despicable former President failed to invite them to the White House when the time to celebrate was ripe.)

The San Francisco Chronicle covered the event AND the 2017 controversy…

Warriors return — so does normalcy

The 2022 NBA champion Golden State Warriors, including guard Stephen Curry, were welcomed by President Biden and Vice President Kamala Harris in the East Room of the White House on Tuesday.

After skipping a visit in 2017, “We have another opportunity based on our accomplishment last year,” said Stephen Curry.

The Golden State Warriors slipped back into the White House comfortably, as though they’d never skipped a beat.

They came bearing gifts. They posed for pictures. Stephen Curry acted as the team spokesman and statesman and was so at ease one could imagine him becoming even more at home in the building sometime in the future.

On Tuesday afternoon, almost seven years after they were last feted by the president of the United States, the Warriors returned to 1600 Pennsylvania Ave.

“You will always be welcome in this White House,” President Biden told the gathered team.

That was the only allusion to what was the subtext for this ceremonial visit: the rancor and divisiveness that had severed normal protocol between sports teams and the White House during the previous administration.

Though other teams have been to the White House in recent years — like the Milwaukee Bucks to celebrate their 2021 title — the Warriors’ visit weighed differently. That’s because the team was the original flash point in the divide between the Trump administration and the normal niceties surrounding championship teams.

After winning the second title of their dynastic run, in 2017, the Warriors were in line to become the first NBA team to visit the Trump White House (though an official invitation was never made publicly). But training camp opened amid the firestorm over the fallout from the white supremacy rally in Charlottesville, Va., and NFL players taking a knee in protest over police brutality. Curry said he would opt not to go to the White House if the team took a vote; Kevin Durant also said he didn’t want to go.

That night at a rally, Trump attacked NFL players in a speech, calling them “sons of bitches” who should be fired. Shortly after, he also lashed out on social media at Curry, tweeting, “Going to the White House is considered a great honor for a championship team. Stephen Curry is hesitating, therefore invitation is withdrawn!”

The Warriors woke up to their phones blowing up. LeBron James tweeted in Curry’s defense, with his now famous “U bum” post. Head coach Steve Kerr joked that “he was going to break up with us before we could break up with him.” Curry called the turn of events, being put in the crosshairs of a president’s ire, “surreal.”

And it was. Though, as we were to learn over the course of the next three-plus years, surreal would become the norm.

“These,” Kerr said at the time, “are not ordinary times.”

That weekend in September 2017 became a demarcation of sorts. While politics and sports have forever been intertwined, and the movements that shape political and cultural forces have always been expressed and highlighted in the sports world, that weekend blurred the lines completely. A sitting president went to war with athletes — specifically Black athletes — whose platforms and leverage were large enough to fight back.

The Warriors used that visit to tour the recently opened National Museum of African American History and Culture with a group of children. The topic of a visit never surfaced after the Warriors won in 2018. In 2019, a Canadian team won the title, and the Raptors had no interest in going to the White House. In 2020, the pandemic made such visits a moot point. That same year, the nation was convulsed by the George Floyd murder, which brought the kneeling protests into devastating context.

But now, seven years since their last previous visit, the Warriors were back at the White House.

“The two times we decided not to go, however that played out, thankfully we have another opportunity based on our accomplishment last year,” Curry said Monday, after he was treated as a conquering hero by the Wizards’ home crowd during a game on Martin Luther King Jr. Day.

“It’s a reminder of the perspective of sports’ place in society and how it brings people together … a celebration of our accomplishment and a reflection of the holiday. The ability to leverage this platform to speak on things that matter and continue to push the needle in terms of bringing people together in the spirit of love and togetherness.”

Tuesday, with Curry still reigning supreme and Trump exiled to Mar-a-Lago, it felt like a return to a simpler time. Curry and Biden were introduced by Oakland native, and lifetime Warriors fan, Vice President Kamala Harris. Former Speaker of the House Nancy Pelosi was on hand to welcome her local team.

The usual niceties prevailed. Biden used the opportunity to express concern for the welfare of Californians in the wake of recent storms. The president drew parallels between the Warriors’ ethos and that of America, noting that “E pluribus unum” (“out of many, one”) is basically the same as “Strength in Numbers.”

Curry, who earlier had thanked Biden for bringing WNBA star Brittney Griner home from Russia, where she had been held as a political pawn for seven months, was the only Warrior to speak at the ceremony. Later, Draymond Green said he could see Curry running for president, noting, “What better person?”

Curry did, indeed, look quite at home. Before handing a No. 46 jersey to Biden and a No. 1 jersey to the first female vice president, Curry addressed his hosts.

“For us to be here, to find the common synergies within what we do on court and what we represent, when it comes to providing hope, inspiration and belief,” he said, “that’s what you do in your roles leading our country.”

The event was uncontentious. It was comfortable and courteous. It almost made it seem like these were ordinary times.